The Hsiao Scholarship provides an opportunity for University of Minnesota students to incorporate an educational experience in China as part of their academic studies (including approved internships or professional training). This scholarship can be used for payment—partially or totally—of travel, tuition, or personal expenses. Awards are typically $500 to $1,000.

You will need to submit:

History of the Hsiao Scholarship

The Hsiao Scholarship was established in 2001 by Jennie and Fred Hsiao, recognized leaders in the Chinese-American community in Minnesota. Fred Hsiao, who was born in Shaanxi Province in China, went to the United States in 1945 to pursue an advanced degree in engineering at the Massachusetts Institute of Technology. After earning a master of engineering, he enrolled in a Ph.D. program at the University of Minnesota. He left the University in 1949 to work fulltime for the Orville E. Madsen construction company, eventually becoming vice president, using the name of Fred Shaw for his business dealings.  Jennie Hsiao, an active and energetic leader and volunteer in the Twin Cities Chinese-American community, was born in Hunan Province in China.  Fred and Jennie were married in Minneapolis in 1958. In 1974, Fred Hsiao and Lyle Lundquist formed Shaw-Lundquist Associates, Inc, which by 2003 was recognized as the largest minority-owned construction business in the Midwest. In 2004 Fred was inducted into the National Association of Minority Contractors Hall of Fame. Fred passed away in 2010, and Jennie continues to be an active supporter of the China Center and the Hsiao Scholarship recipients. 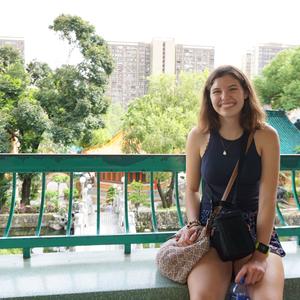 Katherine Tomaska
It was really interesting to learn about new perspectives on world events, and I got introduced to a lot of new traditions and customs.